This is an import from my old blog, yeah I know laziness. I decided to keep it the way it is, as I haven’t seen the series in a long time, still enjoyed it. Plus you get to see some of my old reviews / posts.

Well howdy folks. Good to be doing a full review again, been awhile hasn’t it.
Well for this review, I’ve chosen the most hyped – or hated show (this being based off of MAL review community) of the season; Erased or better known as Boku dake ga inai machi (trans; The town where only I’m missing). And for the record, I’m coming in at a different angle.

The story follows 29-year-old Satoru Fujinuma. A struggling mangaka who also works as a pizza delivery guy. Satoru has the power to travel back in time by 5 mins. He calls this power ‘revival’ (in the manga he refers to this as rewind). By going back in time, he can alter or change one’s fate. And if he fails to accomplish his goal, he gets another chance since his powers has no limits or has any repercussions with the changes being made. By sheer coincidence, he ends up being framed as a murderer and uses his power to go back in time. In this attempt, he reverts to his 10-year-old self. His mission is now to alter his own fate, well as another; Kayo Hinazuki.

Straight off the bat, you can see the major problem with the premises. And that is the power of revival or time travelling. The power of revival has no explanation or any major rules to it what so ever. Like how did he obtain it, is it triggered by emotion or circumstance(s)?. The actual triggering is never explained, only a blue butterfly gives a visual clue to Satoru that a ‘revival’ moment is coming. The only rule that it has, is contradicted – in the first episode. The power can also be seen as a plot device, however, the power is not the main focus of the story. The other problem that besets the show is; cause and effect, in other words, the butterfly effect. What are the consequences of using said power?. It never explains or explores the powers fully. 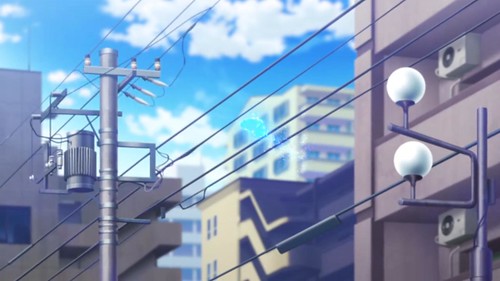 The other problem the story has is the use of plot conveniences. That being the trigger for Satoru to go back in time. Are the plot conveniences a necessity? unfortunately yes. With 20 minutes and 12 episodes. The show is hamstrung in these restrictions; it doesn’t have the time to explain everything in minute detail – which is what most mystery genres excel in. Essentially it has to spoon feed you the answer. Rather than letting the viewers work out the answer. If it was stretched out to 24 or 25 episodes, then criticism levied at it is justifiable. 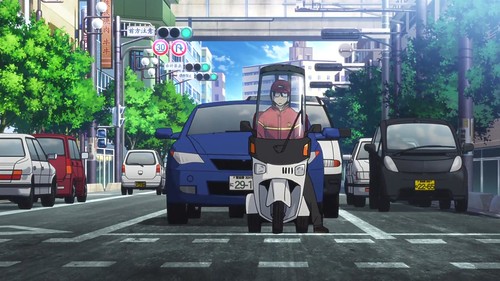 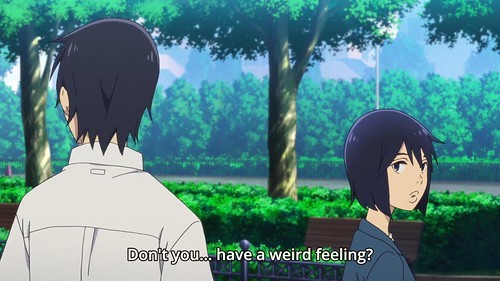 The main running theme through out the show is child-abuse. The show certainly puts of a lot of emphasis on child abuse (for the most part). Even graphically showing that one of the characters (Kayo Hinazuki) getting a major beating from her mother. Despite showing some bruises on her. That would have been enough to imply domestics are happening. So was it worth showing the abuse at the hands of her mother?. It certainly wanted to tug at the emotions, or ‘feels’ and to garner victimisation on to a character. And it achieves that at some level, since child abuse is a very serious subject and it should be handled delicately. However some would say this effect is used as cheap shock value, or underhanded emotional manipulation. Really? I say.

The other themes that I found running are more nuanced and subtle which are; nurture, environment, a slight touch of existentialism and social appearance. And they are some way correlated to the characters.

Satoru Fujinumua is a cynical, world-weary, aloof, detached person. Who has very little to no friends. Working as a struggling mangaka and a pizza delivery guy, he seems to enjoy working on his own – but feels unsatisfied. Airi tries to break his stoic, cold demeanour towards others, in hopes of him opening up. Coupled with a strained relationship with his mother. His adult life in general, is in the mire. When he had the chance of going back to the past, he knew this would affect his adult life in the future. 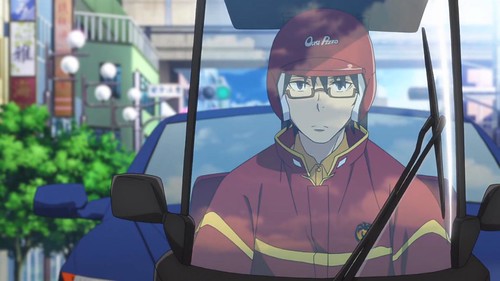 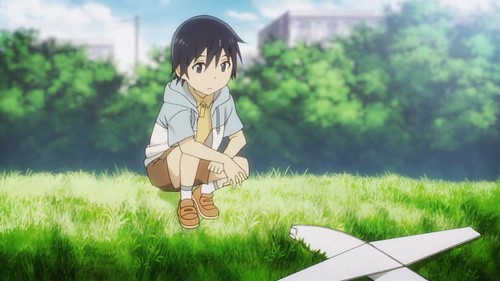 This is where I found the nuances of the two said themes. In his adult life, Satoru has little support, in terms of friends & family. I find that these two are crucial in one’s life, as they are pillars of support and growth. They create the foundation as to how far you will go in life. Because, since he didn’t have that initial foundation, he found himself where he was in life. Unsatisfied and detached from the rest of society. So when he became a murder suspect, he had literally no one to turn to. When his powers kicked in and went back, he took the chance to kill (no pun intended) two birds with one stone. Better his own life and save the victims.

As a child, he had far more support and growth. The amount of support he got from his mother is amazing. She was his rock, every decision he made his mother supported and aided him. Compare that to his adult life. Where things are taken for granted in his adult life, he cherished the time spent with his friends and mother as a child. This created a very loving, supportive environment. Something he lacked in his previous life. The emotional growth came from the interaction with Hinazuki.

Regarding Hinazuki. Not much is shown or seen once her arc in the series is over. But what is important is the series main focus is on her, since she is the first victim of the child murders. Coming from an abusive home, Hinazuki had no friends. This is due to the mental conditioning her mother placed on her. To hide the bruises on her body and to avoid being detected that she is being abused by her. This lead to Hinazuki having a cold, distant, emotionally stunted personality – broken in other words. This however changed when Satoru made the effort, to befriend the lonely Hinazuki. Being ostracised from her peers, and her mother. The show clearly wanted the viewers to feel that Hinazuki is a victim. But with Satoru’ help she warms up and starts to feel emotion, something that Hinazuki has never felt before. Her emotional growth is credited to Satoru. 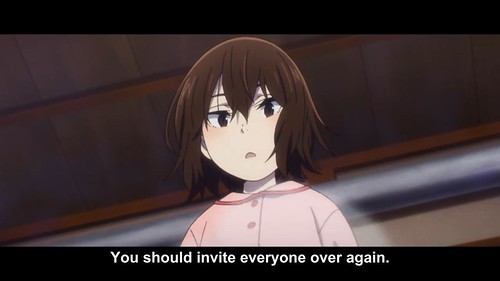 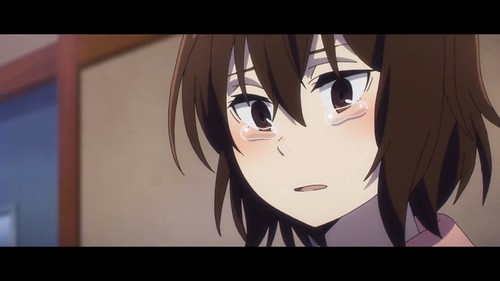 What’s really interesting about the two is this; both parallel each other. Both feel alone, when Satoru is around people, whilst Hinazuki is without. Both are raised by a single parent (Hinazuki’ mother boy friend doesn’t count), both are socially detached. But this is where the differences are shown. Satoru comes from a loving, stable environment. That encourages growth and fundamentally gives support. Whilst Hinazuki is diametrically the opposite, she comes from an environment that is unstable, abusive, unwanted and unloved. Where support or growth isn’t an option to be had. As seen when she breaks down when she sees the plate of food given to her; one showing tender love and care, the other abuse and neglect.

The two mothers in erased are really something. Both are diametrically the opposite of each other, as stated in the way they bring up their off-springs. Sachiko Satoru’ mother is the biggest star to come out of the show. Her guidance and support are crucial to Satoru. Being a victim to the child murderer. She played an important part in his re-living of his child-hood. Unlike Akemi Hinazuki’ mother. Who is selfish and uncaring towards Hinazuki. The show depicts Akemi as a struggling mother and we should feel sorry for her. Unfortunately this wasn’t shown in the best light and handled really badly. Also I did get the distinct feeling that the Hinazuki household comes from an impoverished / below the bread line background. Also her mother came off as cartoon-ish in terms of her behaviour towards Sachiko. 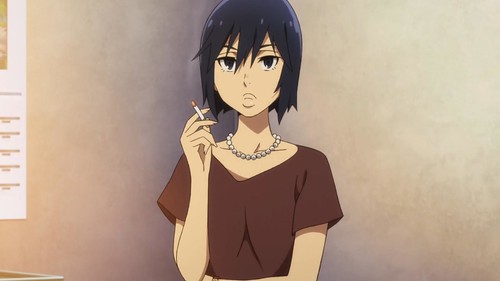 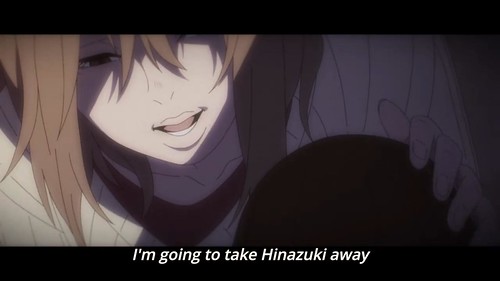 Now this is interesting, Jun “Yuuki” Shiratori is framed as the child murderer. Now why is it that he was convicted as the murderer?. It’s really simple, it boils down to social standings and appearance. Yuuki is usually hanging around young kids, so the perception of him is that he is a loner, a weirdo and has no friends of his age. In contrast that to the killer. Where “their” position is that of; high standing, well-respected, well liked by their peers and society in general – they got away with murder literally. In essence social attitude and perception is the main reason Yuuki got convicted. 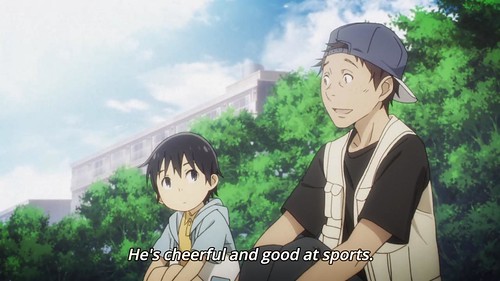 I don’t get why Airi gets a lot of stick. Sure she is a supporting character, and has little development. But some reviewers are really taking the whole candy bar incident to a whole another level. It’s not the fact that her parents divorced over that; it’s the principle of theft. Not the item itself. It could have been any item (of value) stolen and the result would still be the same. Also, this is where she doesn’t get the credit; she is the main catalyst for Satoru’ emotional growth.

As for Satoru’ other friends. Kenya is the only stand out support character. He is intelligent, which tells me that he comes from a well to do family. This further supports my assertion that growth and nurture is a running theme since he knows Shakespeare. Come on for a 10 year old?. The rest are just merely plot devices and do their jobs decently. 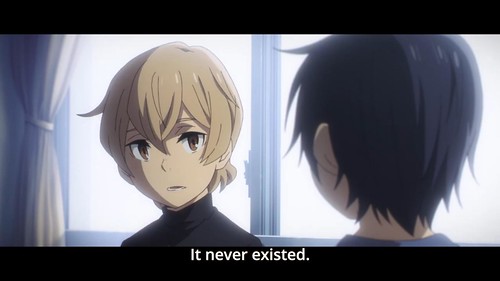 The art is really crisp and fluid. A-1 really went all out on this one. The sheer amount of detail in cinematography, camera direction, facial close-ups were all stand out. The colours used in certain situations created the right atmosphere and tone; either it being a warm family meal, to being abused, to having some hidden malice. I really couldn’t complain, as you can really tell where the budget went. If the characters told the story, the colours sold the story.

A deep soothing voice that oozes charm. What really stole the show for me is Satoru’ VA Shinnosuke Mitushima. And this being his first leading role. His deep, contemplative voice really resounded. It gave weight to the inner monologue of Satoru. And I think that is what made me like Satoru.

Re;Re by Asian Kung fu Generations is really enjoyable. And when you have Yuki Kajira composing, it really adds the gravitas to the shows production. I really did like the opening for episode 11. It had a nice gag to it, considering that the show refers to someone going missing.

The problems of Erased is very clear once you see past everything. The pacing, the plot conveniences, plot devices, support characters – do exactly that support, but lack any form of development. With such a limited amount of characters, what really harmed it more is the poor build up to the reveal of the killer. The show does very little in trying to conceal who the killer is. Even with a supposed red herring thrown in. It does nothing. It makes it too obvious. As stated above the mystery suffers from lack of time. Or rather it doesn’t develop the mystery enough, with such a small cast. On top of that, it has a rather lacklustre ending.

The show had so much potential, and it really wastes it. Each of the genres clash with each other, but work as separate components. The positives still out way the negatives. For just entertainment value, the show shines. For anything else it drops the ball.

For this I’ve given Erased: