Shoujo-ai shows aren’t something I would cover, however, Yagate Kimi ni Naru or bloom into you, caught my attention.
Yagate introduces Yuu Koito, who is one of two leads. From first impressions, I didn’t find Yuu remarkable in the slightest. She is best described as a standard 1st-year high school student, this could change as the series progress, for the time being, I’m somewhat hesitance on that. Anyway, Yuu isn’t quite sure of what club she wants to join but is coerced by one of her tutors to join the student council. So Yuu goes off to join the student council. 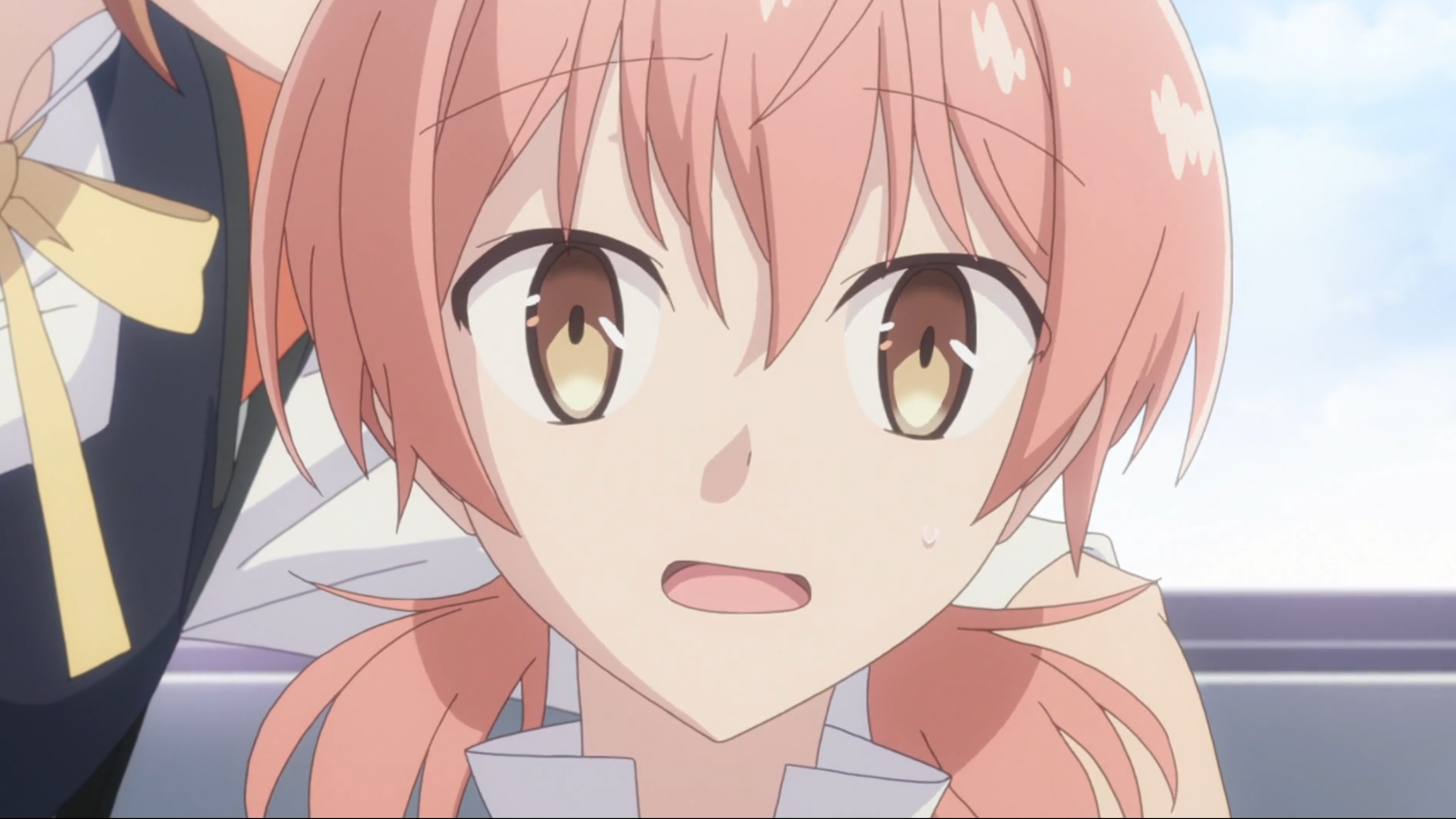 The student council meeting room is situated on the grounds of the school. The impression I’ve got is the school must be prestige’s enough to give the student council an entire building to themselves, which speaks volumes. It is around here that Yuu stumbles upon a confession between a young boy and girl. The girl turns down the boy gently as she can, the girl also happens to be the VP of the student council. Naturally this conveniently happens to be the secondary lead Touko Nanami. Touko is pretty much the antithesis of Yuu, Touko being your standard high school beauty with brains, the usual stuff that is found in most student council settings. In a very weird roundabout fashion; Touko is more taken to Yuu than Yuu taken to Touko. In a sense, Yuu is in awe by how straightforward Touko is with her feelings with boys and how open and honest she is with them. In contrast to herself. 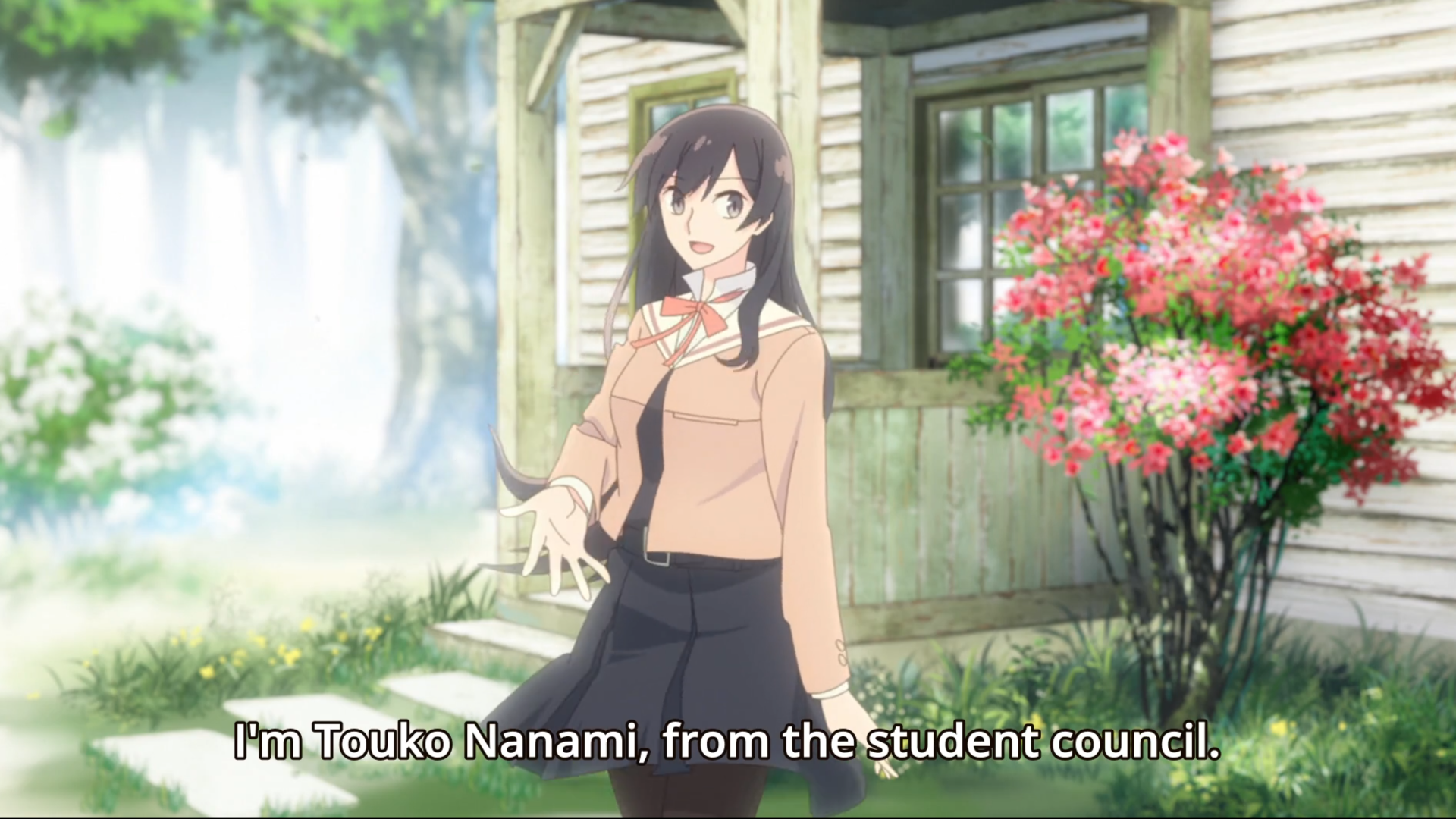 As it seems Yuu is conflicted with her own feelings and how she should deal with a situation she found herself in. In a particular scene, it showed Yuu feeling isolated from her friends. As I’d assume the scene is hinting that she is close to her friends and can talk to them about anything, however, whatever is on her mind. It seems she thinks Touko has the answer. There was another scene where Yuu was straddling on a single yellow line; a clever (or blatant) symbolism and foreshadowing, where it’s saying she’s about to go into a lane that she may not be able to turn back from. Which is ironic that the lane she has chosen to go in to. 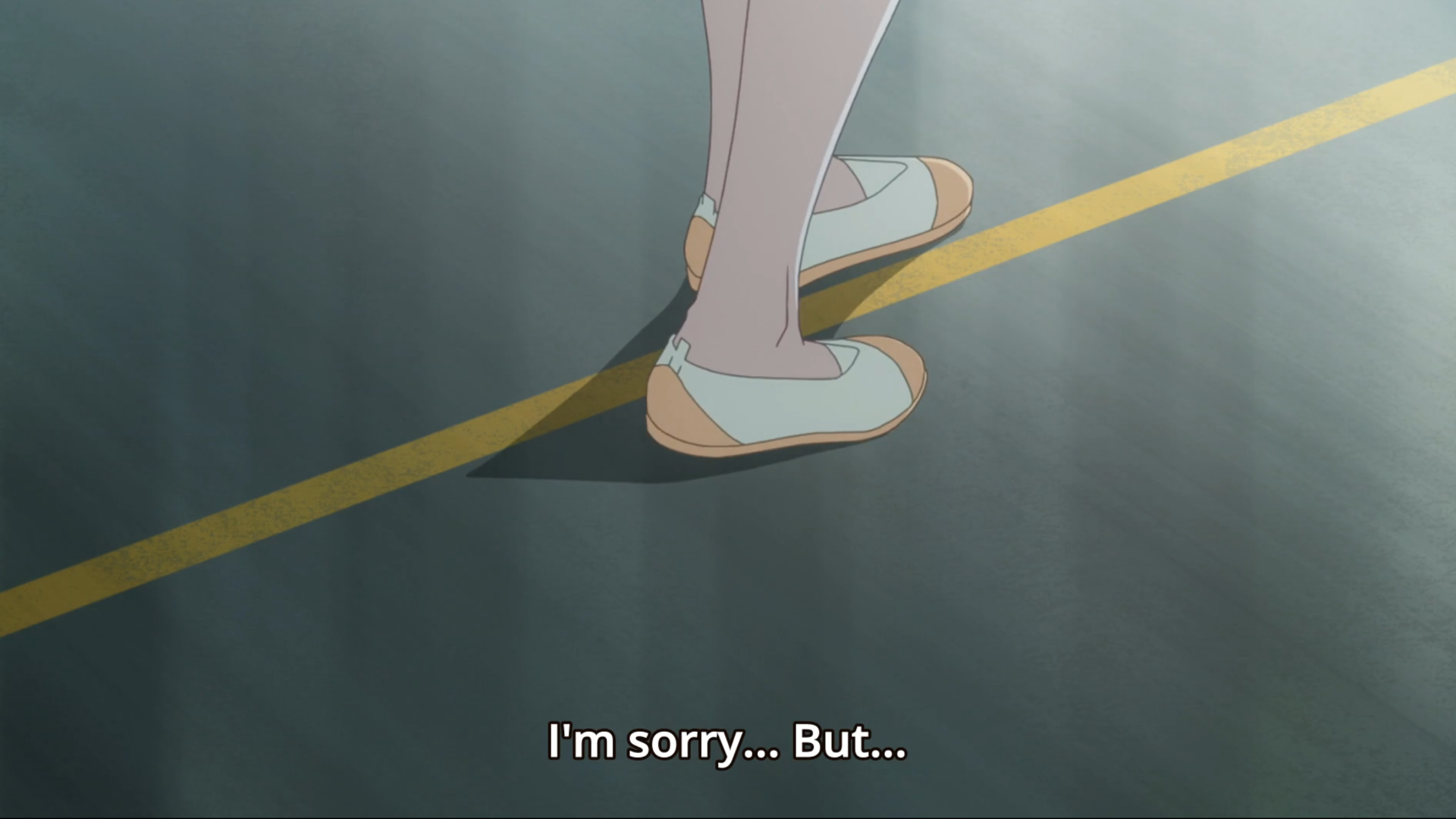 Is where Touko is. It is here that we get to see what is bothering Yuu. And not so surprising, the backstory of Yuu is that a young chap has feelings for Yuu. Now naturally most girls like Yuu, pretty much had their heads in the clouds when it came to romance, especially when guys were confessing to the girl, she felt giddy. However something changed, when the young chap was confessing, she wasn’t feeling that giddy sense. She felt grounded and didn’t feel the same way – to infer, she friendzone the poor guy…hard. However, Yuu feels pretty relieved that this isn’t playing on her mind anymore. At this point, however. 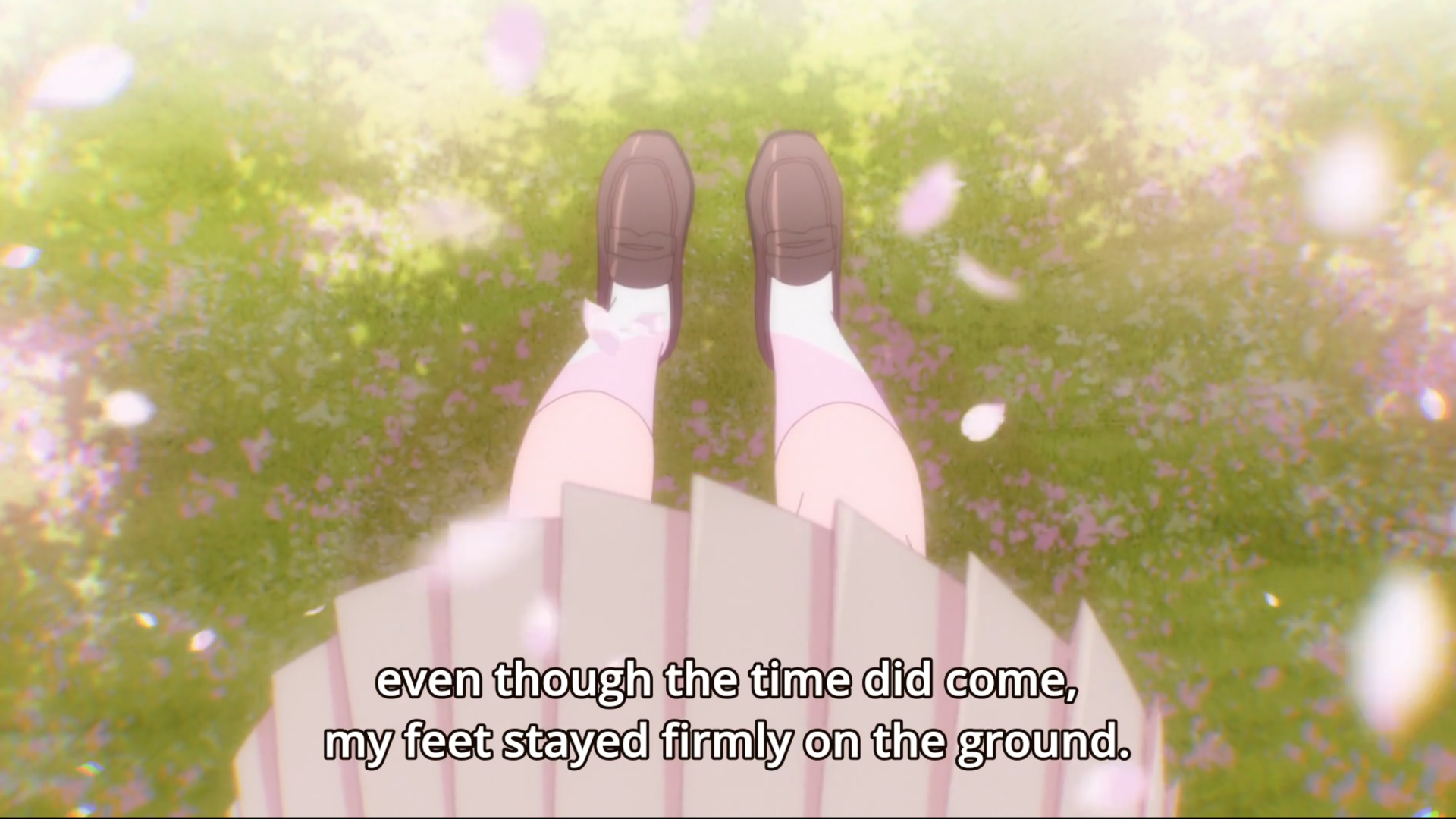 Is where the plot got silly for me. The chemistry between Yuu and Touko isn’t there (yet), it felt flat and if I were to push it – forced even. Neither of the two has done anything remotely interesting and the plot is already pushing this “budding love story” in the first episode, kind of hard to take seriously when there’s hand holding involved, it kind of makes the romance forced. The other thing that I did feel is the pacing of the episode. I felt like the pace was to get to the most pivotal scene. 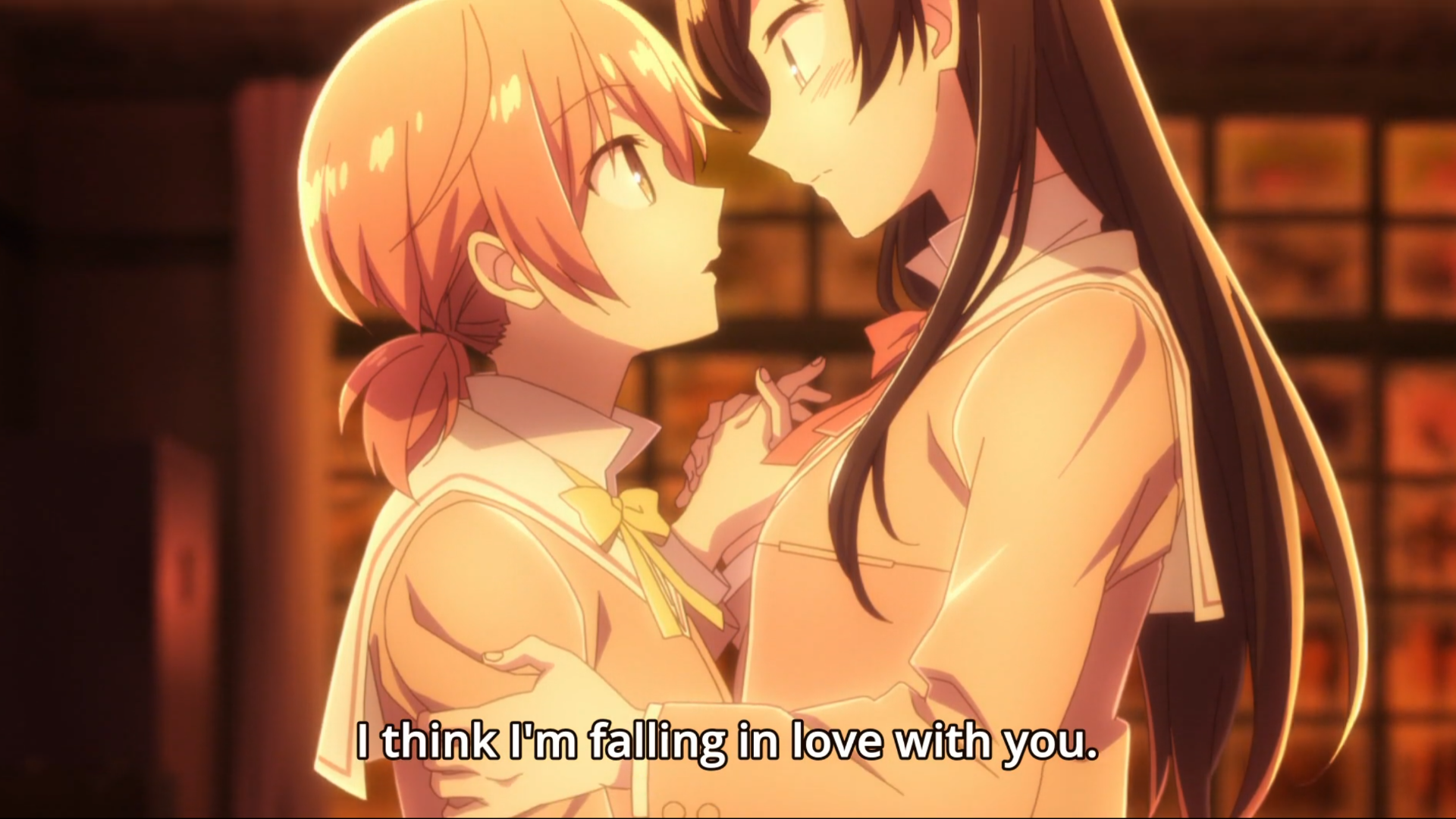 Hopefully, the pace will be better in the next episode and let the romance feel organic at least.

I’ve decided to affiliate this blog with amazon, however all affiliated links will be unobtrusive. To help support this blog, you can check out the link: Strawberry Panic